Motion to Lead: The Campaign for Northwestern Pritzker School of Law 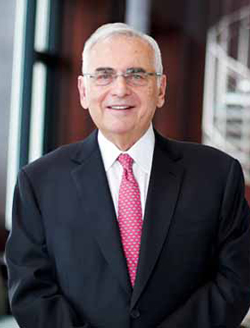 “When I was in my early teens, a friend of the family—an African-American man—was wrongfully accused of a crime because of his race,” Neil Bluhm said. “He was framed by Chicago Police officers for a robbery they knew he didn’t commit. I went to court with my mother every day of that trial and watched as a lawyer proved that our friend was innocent.”

This early, transformative experience demonstrated the power of lawyers to do good in the world. It made an indelible impression on Neil Bluhm. So his decision to go to law school didn’t come as a big surprise to his family.

“Before I went to law school, I was a numbers guy—an accountant. At Northwestern Law I learned how to analyze arguments and how to write. It broadened my horizons considerably,” he said. “I had an early interest in tax law, because I saw that as a good way to earn a living.”

While a student at the Law School, Bluhm had the opportunity to work for the summer at the Justice Department, in the Tax Division, in the Summer Law Intern Program.

“Except for college, it was the first time I had been away from home, and it was a heady time to be in Washington D.C. Bobby Kennedy was the Attorney General, John F. Kennedy was the President. The Civil Rights movement was gaining momentum, and there was a tremendous feeling of optimism around that. My time in D.C. expanded my interest in civil rights and social justice, even though I didn’t go into that kind of practice.”

Following his graduation from Northwestern Law, Bluhm’s remarkable and distinguished career began at the Chicago law firm of Mayer, Brown, and Platt, where he became a partner and after seven years co-founded JMB Realty Corporation. JMB soon became a major commercial real estate investment firm that owns, develops, and manages a variety of large real estate projects throughout North America, including malls, hotels, and office complexes.

As managing principal, Bluhm also oversees the strategic direction of Walton Street Capital LLC, a private equity real estate investment firm that he co-founded in 1995 with former senior executives of JMB Realty. The firm focuses on investing the principals’ own capital in real estate, in partnership with institutional and private investors. Since its founding, Walton Street Capital has received total equity commitments in excess of $8 billion. He is also chairman of Rush Street Gaming, which develops casinos, including The Rivers Casino in Des Plaines, Illinois.

“You have to remember,” he said with a laugh, “that I grew up poor. This fact really drove me to succeed in business. I felt the need to take care of my mother and my sister. I had to. Even today, when a lot of my friends have retired, I still work. I have to!”

Bluhm is now translating his phenomenal success in business into thoughtful and strategic philanthropy that supports social justice work and several other important causes. His gift of $15 million to the Law School is part of a $25 million leadership gift from Bluhm and the Bluhm Family Charitable Foundation that will also benefit Northwestern University and Northwestern Memorial Hospital.

Bluhm wanted his Law School gift to be allocated in ways that would help Dean Daniel B. Rodriguez accomplish key objectives. With that in mind, the largest portion of the gift—$6 million—will be unrestricted. These funds will be used to fund key initiatives growing out of the currently underway strategic planning process and need-based scholarships.

“I went to the Law School on a scholarship,” Bluhm said. “I wouldn’t have been able to without that assistance. I wanted to give back in that way, too.”

The Law School’s Loan Repayment Assistance Program will be the next biggest beneficiary of the gift—$5 million dollars will be used to help graduates who accept public service and government jobs repay law school loans. The Bluhm Legal Clinic will receive $3 million to strengthen its endowment and enhance clinical legal education programs; these funds are in addition to the $7 million Bluhm previously gave to support the legal clinic. The remaining $1 million will be used over a ten-year period to build ongoing, sustainable support from Law School alumni through annual gifts to the Law School Fund.

“With major changes in legal practice forcing law schools to evolve to meet the demands of the market, we live in an unprecedented time of both challenge and opportunity,” said Dean Daniel B. Rodriguez. “The old models don’t work as well as they once did; we need to build new models. Northwestern Law School is able to do this because of the extraordinary support of alumni like Neil Bluhm.”

Bluhm’s record of service and philanthropy to the University and to the Law School is remarkable. In 1999, he and several members of his family gave a gift of $7 million that named the Bluhm Legal Clinic. He serves on the Board of Trustees’ Investment Committee, and previously he served on the Law School’s Law Board, the Law School Visiting Committee, the Law Alumni Board, the Law Development Board, and the Law Campaign Steering Committee (during Campaign Northwestern). In 2009, he received Northwestern’s Alumni Medal, the highest honor an alumnus can receive from the University.

Bluhm is the father of three children, Leslie N. Bluhm, Andrew G. Bluhm, and Meredith A. Bluhm-Wolf. Meredith is a 1995 graduate of Northwestern Law, and she serves on the Bluhm Legal Clinic’s Advisory Board.

“This is the largest gift in the Law School’s history, but that is not why it is important,” Rodriguez said. “What is important about Neil Bluhm’s gift is the future it makes possible. It will enable us to temper financial burdens on our law students, advance the excellent work of the Bluhm Legal Clinic, and pursue strategic initiatives to strengthen the impact and reputation of our world-class law school.” —Kirston Fortune